Posted on September 4, 2016 by keithrichards

This is the first time I’ve competed in an RTV and wow, what a challenge!

I’ve attended the RTV’s at the same location in February and I was allowed to drive around to get the hang of the game but didn’t actually take score.

Borg 4×4 organise these RTV and it is aimed at an inter-club challenge under the heading of the Lauren Trophy. This has been running for a number of years.

The course is set up on a Saturday by a few skilled in this process and who are willing to give up their time in pursuit of the game.

The rules are simplicity itself – to describe that is and less so to navigate. A pair of bamboo poles stuck in the ground, one with a white sock for the drivers side and the other with a red. The red I presume is for the passenger side but then that depends upon the angle to approach at the gate!

RTV – Road Taxed Vehicle, so any legal car then. Mostly land rovers but others too including a real impressive Toyota Hilux. Massive length that we joked it should be articulated in the middle somewhere. As it went around there was something sliding side to side in the pickups boot – possibly a Suzuki Jimny.

It was Sunday 14th Aug, about 22 competing cars although it felt like many more.

Brickhill is south of Milton Keynes, with terrain of various wooded areas and grass land – all made equally challenging by the experts routing the course.

The challenge is to drive through the gates, all ten of them without touching either bamboo pole. It should be possible and feels that way when you do your walk around. However, getting the angle right so as to not make your vehicle wider by going at an angle or dipping into a hole causing your vehicle to sway. Ruts are a pain – especially if the pole is actually in the same one you are using.

Two other rules – no stopping for more than two seconds and not allowed to cross your own tracks. SWB cannot use reverse but LWB can use reverse just the once but you need to shout “shunt” prior to stopping and engaging reverse.

There were Five courses laid out and different groups started at different places. This is the order to which I took. 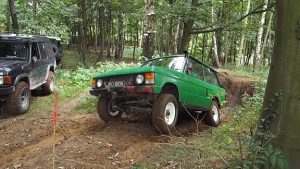 In the trees, growing close together making tight turns, difficult visibility of the route and undulating ground. In February – the soil was wet and my all-terrain tyres just clogged with mud and become so smooth as to be like a town car on snow. 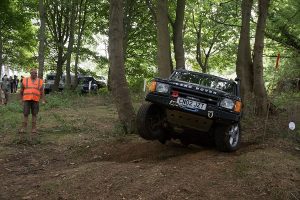 The course was very clever, deep dips, awkward cornering and tight gaps between trees. All possible although seeing the route whilst driving was not that easy. I was crawling around slower than a walking pace just looking for the best route. 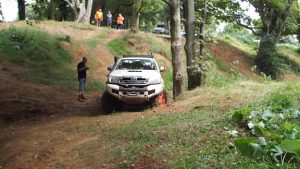 The next was with tree more open with small valley and crumbling dry soil. Some tight turns so a lot of forward planning was needed so driving slowly and keep questioning if your route is the best – since if you stop and reverse then it’s game over. 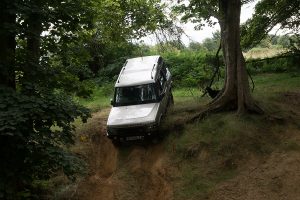 Taking wide turns out on open land was safe but only if you knew you wouldn’t need that land further down the course.

There was a pair of trees almost too tight to pass through. I’d seen others really struggle but my game was over before that. I went through a gate with a 300mm horizontal tree root and a dip just after. Caused my rear tyre to slide of and hit the stick. Some of the more serious guys would have stopped so as to not give the secrets away further down the course but at this point I didn’t care about scoring so picked off a few more gates just for fun.

How to score then – the first gate is ten points and the last is one point. If you hit nothing and get at least your front hubs through all gates then you will score zero; which is a win. So basically the score against you is the first gate you fail with, if any.

Third was in open air, a steep hillside of grass and exposed soil on tracks with an area of waste grass land. Not taking the usual track over the grass and the banks of grass making the going a little tough. One Discovery got stuck balancing like a see-saw on a mound of grass.

The fourth was interesting, open grass field with small dips to catch you out causing your vehicle to rock sideways and hit a flag. The end was up a bank towards a fence so stop before hitting the fence but after your front hubs are through. 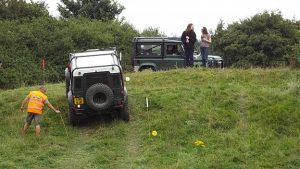 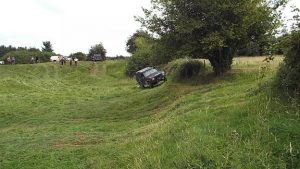 I was surprised at how many gates were being hit by the more experienced guys on this course – made me think twice as hard when it was my turn.

I caught an excellent example of a failed hill climb engine stall recovery on film. 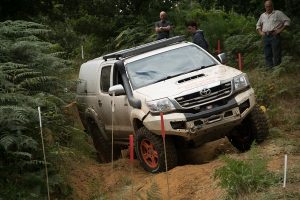 The last course was the most rugged. A steep slope of dry soil in a track through woodland. Down and up on a dusty track with existing ruts to guide you into a flag so very careful management of vehicle positioning and focusing on the rear of the car as it doesn’t already follow the front tyres.

The result are in:

SWB (Defender 90’s or a Discovery tray back)