Posted on November 13, 2016 by keithrichards

Health and Safety, Rules and regulations, means that when there is a flood, there is a limit to what we can do when we go out on a response call.

Buckinghamshire Council sponsored a small team of ten of us to go on some cold water training, selecting those likely to support their region in a flood situation. 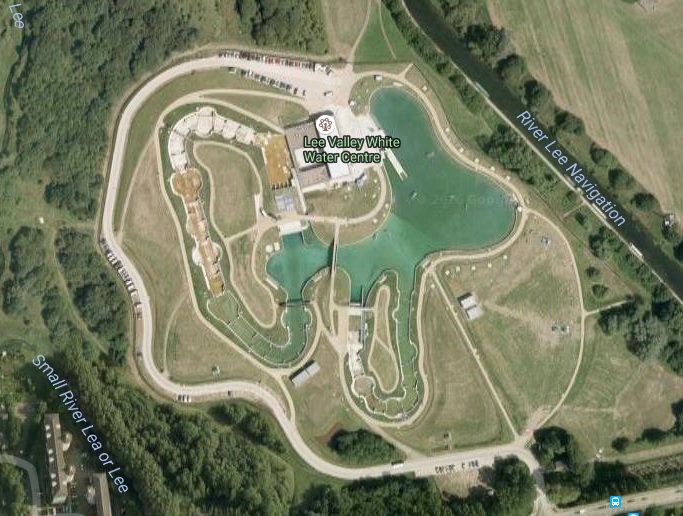 Training took place at Lee Valley White Water Centre, just North of the M25. (credit to Google Maps for this image) This is a purpose build facility used for entertainment but also for those engaging in water sports to Olympic standards. We saw some outstanding kayaking early in the morning.

Fireman and other government services are training in various skills relating to water at this site.

Certainly, an honour to be included on this course. The trainer/instructor, Richard Jenkins of Spartan Rescue, is very highly experienced in cold water rescue. The aim of this course is to understand the basics of self-rescue and the effect of cold water.

The morning was class room session, theory on rescue but also why people drown. A lot of emphasis on not rushing in and making a bad situation worse. How to think of the risks and put measures in place for when any recovery attempt goes wrong. Flowing water has a force which can be fun but not when you are fighting against it. The effect of cold on the body and how so many people underestimate just how quickly the body starts to shut down and stop functioning in cold water.

We also got to assemble our own life jacket, comprising the jacket, CO2 bottle and dissolvable salt trigger.

The afternoon session was a practical. We put on an all in one fleece and dry suit. The suites kept most of us dry but some were not so lucky. 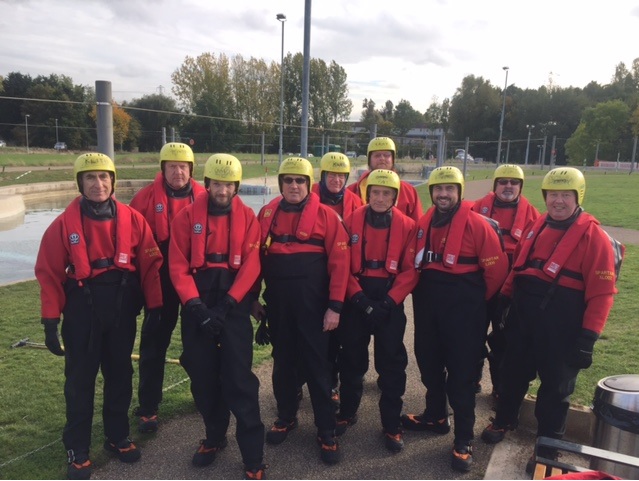 The idea was to set off the life jacket as soon as we got in the water – which we all did and they worked OK.

Interesting experiences, buoyancy making walking difficult, no swimming with a jacket so floating on your back with only butterfly strokes possible and limited at that.

First it was to experience floating in flowing water and making your own way to the side, or missing and floating out into the lake to be rescued by rope.

Next was going out into more aggressive water, rapidly flowing through a restriction in the width, like a mini water fall. Yes I took in water that felt like I breathed a pint but was possible only a cupful. We discussed aspiration of water, breathing it in. Trying not to cough worked well and I maintained floating down the flowing water just fine. It was an odd experience and desire to cough quickly passed. I think coughing would have arched my back and I’d have lost the ability to float. Certainly, no chance to stand up and cough. The water was about 1.5m deep and flowing at jogging pace. They have some seriously good pumps to get that volume flowing.

Next was rescuing others with a throw rope. I was very poor at this. I couldn’t believe how rubbish I was as throwing a rope. I’ve since purchased one and practiced. It is fairly easy but there is a technique to getting a good distance and direction to the throw.

I discovered a whole new meaning to trust. When floating in flowing water, visibility of the side is almost impossible so you trust people calling instructions to you. I guess we faired quite well since we adopt a banksman in winch recovery and all fall into a fairly well organised team rather than a free for all and everyone having an opinion. However, wrong instructions or too much effort from me and I got caught in an upstream current that pulled me out form the edge and round for another go.

Actually, this meant I was fortunate enough to experience floating on by whilst a rope was thrown for me. It was within inches of my hand but it might just have not been there at all. Another rope landed closer and I managed to get a hold only to be told to let go since I was approaching the next water fall/restriction in the river. So I floated out towards the lake and another rope recovery to drag me in.

Final session was how to walk across a river in spear head formation as a team all holding on tight to one another’s harnesses. We walked out into the full force of the river just downstream of the restriction. We did exceedingly well. Working a team and our generally better than average body mass appeared to help. Lighter people did not fare so well.

All in all, a great appreciation for water.